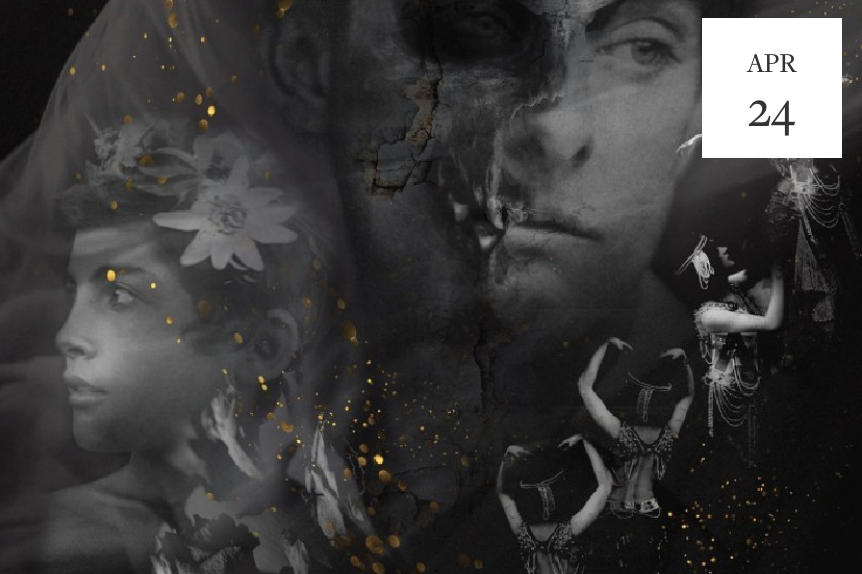 Nina Antonia will examine the aspects of enchantment that infused the Decadent movement as well as the perils of seeking wisdom outside of earthly boundaries. Robert Podgurski will address the ways in which Oscar Wilde’s liberated worldview may be read, not just textually, but as magical action.

This lecture will take place virtually, via Zoom. Ticket sales will end at 12:30pm EST the day of the lecture. This event will be recorded and ticketholders will receive a temporary streaming link after the live stream.

Ticketholders: a link to the conference is sent out at 1 pm EST on the day of the event to the email used at checkout. Please add info.morbidanatomy@gmail.com to your contacts to ensure that the event link will not go to spam.

PLEASE NOTE: This lecture will be recorded and available for free for our Patreon members at $5/above. Become a Member HERE.

“Dancing With Salome: Decadence & the Supernatural” by Nina Antonia

Nina Antonia is the author of a trinity of critically acclaimed books exploring the uncanny forces surrounding Oscar Wilde and his coterie. The majority of contemporary mainstream studies of the 1890’s excise the unseen, magical aspects that would have informed the art of Wilde and his peers, including W.B Yeats and Arthur Machen, who were both members of The Golden Dawn. Nina will be examining the aspects of enchantment that infused the Decadent movement as well as the perils of seeking wisdom outside of earthly boundaries.

In this talk, Robert Podgurski will be addressing the ways in which Oscar Wilde’s liberated worldview may be read, not just textually, but as magical action. In particular, Chuang Tzu’s non-doing as Wilde understood it, presents a puzzle for the engaging reader, but one that is first and foremost intended to be playful. This talk is a supplement to Podgurski’s essay “Oscar Wilde’s Active Inaction and Composing the Individual” that will be included in the upcoming issue of The Fenris Wolf. For those new to the thought of Wilde and his world, this presentation is intended to raise some awareness of the interpretive act as it relates to the contemplative. Ultimately, any attempt to translate the complexities of Wilde’s understanding of freedom is to challenge the procedures and basis of western learning itself.

Nina Antonia has been a published author since 1987, specialising in the unconventional, wayward and decadent. Despite critical acclaim from the likes of The Washington Post and The Gay & Lesbian Review, Ms Antonia has skirted establishment confines to create a unique body of written work. Over the last 5 years Nina has chronicled the esoteric aspects of the lives of Oscar Wilde, his ‘homme fatale’ Lord Alfred Douglas and the poet Lionel Johnson, who inadvertently caused the greatest scandal of the Fin De Siecle by introducing Douglas to Wilde. Ms Antonia will be discussing this uncanny alliance in her most recent books; The Greenwood Faun (Egaeus Press) Incurable: The Haunted Writings of Lionel Johnson, the Decadent Era’s Dark Angel (Strange Attractor Press) and Dancing with Salome: Courting the Uncanny with Oscar Wilde and Friends (Trapart Books).

Robert Podgurski’s engagement with magic over 40 years has included mountaineering, yoga, chi gong, prose, and verse. His Sacred Alignments and Sigils (North Atlantic Books, 2019) is the most current manifestation of his project(ive): the Grid Sigil. As a practical and investigative tool The Grid Sigil deals with the closely knit relationship between ley-lines, meta-neural-programming, and geo-magnetic sorcery. In continuation of this working Podgurski will be launching his book, The Aetheric Alignments (prospectively fall of 2022 / spring 2023 with Inner Traditions). This study encompasses the history of the aether in early western as well as eastern consciousness up to  our modern era as well as broaching practical applications. Podgurski is also the author of several works in poetry: Wandering On Course (Spuyten Duyvil Press, 2014); and his on-going long poem, Intersecting Visions / Vision Intersects (Bullhead Books, 2019).  His most recent poetry series, In the Shadow of This Branch is forthcoming in 2023. Along with poetry Podgurski has also authored fiction including his first full-length novel, Beyond the Lens of Time (date of publication to be announced shortly). For more information contact him at: deathsigil@gmail.com or visit his website: https://robertpodgurski.com/